*Warning* This material contains graphic images and dialogue and may not be suitable for all audiences.

The Vice Guide to Travel

VBS.tv is a free internet resource with independently-produced short documentaries addressing all topics of life. They send their correspondents all around the globe to explore various issues. In ‘Vice Guide to Liberia’ they take a close look at the variety of tensions that face the post-civil war torn country of Liberia.

Liberia was the United States’ first and only experiment with quasi-colonialism. Liberia’s constitution was written in Washington DC and its capital, Monrovia, was named after President Monroe. It was set up as a nation for freed slaves to call home after leaving America. Yet upon their arrival, the former slaves immediately enslaved the indigenous population following the same model they had learned from their time in America. This system of slavery lasted for about 140 years until the first native-born president was democratically elected.Samuel K. Doe was president from 1980 until 1990, when he was overthrown by the American-educated (and some say American-funded) rebel leaders Charles Taylor and Prince Johnson. When they captured the country’s capital they tortured, murdered and ate President Doe. After overthrowing Doe, Charles Taylor ran for president on the slogan “He killed my Ma, he killed my Pa, but I’ll still vote for him”… and he won.

But as a result if his corruption, Liberia was once again in the grips of a civil war as various war lords fought for control of the nation within months of Taylor assuming power. The legacy of civil war in Liberia is astonishing; it is the fourth poorest country in the world, 50% of the population is illiterate, 70% of the female population has been raped, there is an 80% unemployment rate, and a significant portion of the population has consumed human flesh. What we see today in Liberia can be described as, without any stretch of one’s imagination, hell on earth.

The VBS crew flew to Liberia as Charles Taylor was on trial at The Hague for war crimes, to see the current state of the nation and to explore what had become of the other ex-war lords and the soldiers that fought in the wars. The film was basically split between the team’s visit to West Point, a slum on the country’s coast, and their time spent with Joshua Blahyi, an ex-general who fought in the country’s wars. West Point is generally viewed as one of the worst slums in the world. There is no electricity or sewage system, and trash and human waste cover the streets. The health conditions in West Point are atrocious; AIDS, malaria and a plethora of other infectious diseases are everywhere. The vast majority of shops found in the slum are merely covers for heroine dens where child junkies can be found smoking both heroin and sniffing cocaine. Brothels are also a defining feature of the slum. A brief visit to one of the brothels reveals appalling health and hygiene conditions, accompanied with horrendous tales of sexual misconduct on behalf of the UN peacekeepers stationed nearby.

The Three Cannibal Warlords of Liberia

After visiting West Point a second time, and literally fleeing for their lives, the team avoids returning and shifts their focus to the ex-generals. The generals of these rebel forces have all assumed various nicknames throughout their time fighting in order to strike fear into the hearts of their enemies, but also to avoid recognition after the conflict was over. Of the three generals interviewed in the film, one is called General Bin Laden, one is called General Rambo, and a third is known as General Butt Naked on account of his and his soldiers attire (or lack there of) on the battle field. Joshua Blahyi a.k.a. General Butt Naked is one of the most famous people in Liberia. By his own admission, he is responsible for a minimum of 20,000 innocent civilian deaths. Yet, despite this fact, he was recently pardoned for his involvement in the wars, thanks in large part to his recent conversion to Christianity. He says in the film that despite having the option of returning to fight, he chose to stay and honor his new lifestyle, and this was a major reason for his being pardoned. General Butt Naked and his soldiers, or his ‘boys’ as he refers to them, were cannibals. They would often eat the remains of their enemies in drug-fueled frenzies. Before going into battle, they would murder and drink the blood of an innocent child as they believed this would make them impervious to bullets (this and being completely naked). Today, General Butt Naked has abandoned this name and re-assumed his name, Joshua Blahyi. He tours the country preaching in evangelical churches. 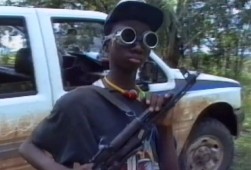 Liberia is clearly in extremely dire conditions. The reporter in the film describes it as a strange mix between heaven and hell. On the one hand, you have the awful health conditions, the slums, crime, murder, and cannibalism, while on the other hand you find churches on every street corner and massive Christian revivals held with thousands of people in attendance. The ex-soldiers are either living in a drug-induced stupor in the slums, or they are in hiding in the jungles, very well armed. According to General Rambo, if they wanted to invade the capital Monrovia, they could do so within a matter of hours. This is a very serious issue considering the fact that the UN peacekeeping troops are scheduled to leave in less than a year. One must wonder if war does indeed break out again, as it seems not unlikely that it will, what will become of Joshua Blahyi? Will he stay on the side of God and continue to preach about the ways of God or will be abandon this and return to the ways of General Butt Naked?

3 responses to “Review: The Vice Guide to Travel – Liberia”