“The calamity of the right-less is not that they are deprived of life, liberty and the pursuit of happiness, or of equality before the law. Their plight is that no law exists for them.” – Hannah P.

This seems to be especially true for the great Hawaiian Islands apparently, as the state currently has little to no laws that actively protect its` thousands of yearly human trafficking victims, an increasing local epidemic. Many people often think that sex and human trafficking is something that happens abroad, to other people, in other places. Unfortunately, this is not the reality we live in. Hawaii’s location is a hot spot for migrant traffickers and criminals coming from the East. The International dateline is just a few thousand clicks West and just past that you’ll encounter the Philippines and other East Asian Nations. Conceptually, much the same way the southern states are most affected by illegal immigrants coming in from the Mexican border, Hawaii is most affected by their Eastern neighbors coming in from known smuggling and trafficking sea routes.

Among the most notorious nations locally renowned for this kind of trafficking coming into the isles is India and Thailand. Human trafficking is our main topic but drugs narcotics and smuggling are also known to commonly appear on the island in much the same way.

With a large emphasis on “coercion” at the heart of all trafficking cases local victims are commonly forced to engage in things like prostitution and slave labor. Human trafficking which encompasses both sex and slave trafficking is defined as “the illegal trade in human beings for the purposes of commercial sexual exploitation or forced labor: a modern-day form of slavery and the fastest growing criminal industry in the world.” These conventional terms set the standard and the framework for what qualifies as human trafficking on a societal and legal level in the United States.

As of 2012 Hawaii has been openly listed as one of five states who have failed to pass sufficient legislature that adequately addresses the burden of human trafficking. Many speculate that “Hawaii may in fact become a trio of states remaining in which labor trafficking and sex trafficking will continue to thrive.” 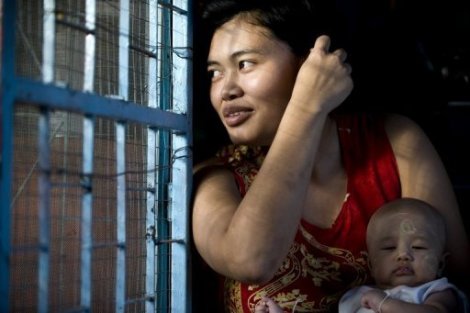 National statistics show that sex trafficking a majority portion of human trafficking cases on the island. A number of the local night clubs supposedly operating under legal statutes are known to be responsible for harboring and abusing many of these women that are brought in from the East. Eastern migrants are not the only sex slaves, local women of all kind that find themselves on the lower end of the socio-economic scale are pushed into this world of prostitution as well, though this is far less common on the island. Sex trafficking rates estimate over hundreds of women are forced to engage in prostitution on these streets every year. These female sex slaves can be visibly seen soliciting at all hours and predominantly along the Honolulu strip.

The victims of sex trafficking often end up in jail and incarcerated themselves. Even once released the infraction is put on their record and they have no where to go but return to their abuser who likely paid a small fine and then was released as well. This is a problem which perpetuates the cycle of violence against these poor women. The justice system makes it difficult for the victims to break free from their captors and often ends up penalizing them. Juveniles involved in this trade are also persecuted as the laws offer no protection to them either. To add insult to injury, there is in fact no way for the police to detain juveniles rescued without criminalizing them. Many locals have called for the implementation of the Safe Harbor Bill which would be designed to help these young victims. These legal issues are a testament to how alarming this conflict is and how there still remains so much to be done in the war on trafficking.

Thankfully, as of May 2nd four bills were passed during the 2013 legislative session. These 4 bills will help to better combat human trafficking in Hawaii as well as better protect the victims. All that remains to put these bills into full affect is for the Hawaii Governor Neil Abercrombie to sign and pass them into law, a process that most locals will agree, can`t be finished soon enough.

How Can You Help?

Local island culture teaches us that whether we be traditional locals, tourists from the main-land or long time residents we all have a duty to the community. In asking why do we care I hope that locals and tourists alike will take this to heart and remember it is everyone`s duty to alert and aid our fellow “ohana” or family, in Hawaiian. The island motto is: “Ua mau ke ea o ka aina i ka pono”, or the life of the land is perpetuated in righteousness…“Hawaiians use pono to mean what is just or right, in harmony with nature and with other people. These words are hung atop an enormous bronze seal that hangs over the State Capitol.

At an individual level we need to “consume carefully”. The one thing everyone can do to play a part without having to get seriously involved is to stop the local aggregate demand for the products that are made using things like child, sex and slave trafficking. Since Hawaii is a tourist based economy raising awareness and avoiding these products seems among the most cost-effective solutions we have off-hand. Not buying their products and not supporting their brands is a great way to take an easy initiative against trafficking. Buying and supporting illegitimate organizations creates the very basis for the Aggregate demand and supply relationship. By avoiding such organizations as Maui pineapples and a number of local ground coffee grinds you are ceasing the financial support that is creating the local basis for slave labor industries in the first place. This is just a start however as much remains to be done.

2 responses to “The dark side of paradise: Hawaii’s Human Trafficking and Sex Trafficking Epidemic”